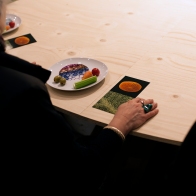 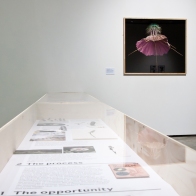 Making Knowledge was Central Saint Martins first survey exhibition to focus on the research work of CSM staff and explored in particular the research process through which knowledge is constructed. Vitrines placed throughout the gallery in which images, texts and objects revealed the working methods of each researcher. A large round table in the centre of the space became a meeting place for discussions around the themes of the research.

To work outside of ones own discipline, to collaborate with scientists, to work in their territory and to appropriate their technologies is a privilege borne of curiosity and a desire to explore the world beyond the limits of my own eyes. Advances in microscopy reveal a nano topography filled with forms and structures of such detail and complexity that challenge our perception of life. Working with botanical scientists Dr Madeline Harley and Dr Wolfgang Stuppy at The Royal Botanic Gardens Kew, and Jose Feijo at the Gulbenkian Science Institute in Portugal opened up the possibility of extending the conventional practices of microscopy to combining the digital, the analogue and the manual in a process akin to reconstructive surgery, to create images that lie somewhere between science and symbolism.

The work begins in the field, developing a familiarity with the subject; walking through the landscape, looking, smelling, photographing and collecting plant specimens, an essential approach for formal identification. Full frame macro photographs concentrate looking and serve to capture the moment of discovery, and as flower portraits reveal a fragile sense of hyper-reality.

Moving to the studio, the flowers are identified, and drawn, using a mixture of Indian ink and aniline dyes painted directly onto the paper and quickly washed off. More of an intuitive impression than illustration the residual image becomes a graphic herbarium specimen impregnated into the paper, while the flowers themselves are dried and pressed between blotters.

The SEM is an exceptionally powerful instrument capable of producing images at the highest resolution at magnifications up to X10K. Coated specimens are placed in a vacuum chamber and scanned by a beam of electron particles. The resulting signals are translated into the digital image on screen. In contrast the Light Microscope is a more conventional lens based
instrument that uses visible light and compound lenses to record images.

The high power abilities of the microscopes was subverted to explore whole specimens through multiple exposures accumulated by manually panning across the surfaces of the subject. In a form of reconstructive surgery individual photographs are carefully pieced together to form a whole image.

Returning the specimen to a prime state requires correcting distortions arising from parallax, modulating tonal variations, repairing damaged tissue and the removal of unwanted artifacts.
For SEM images the final phase is a laborious, pixel by pixel painting out of all background distractions to create a solid black ground. In LM images taken at multiple depths of field, areas of prime focus are isolated and compressed before stitching to the next frame.

Just as flowers employ colour-coded messages to attract an audience of insect collaborators, the journey from field to frame seeks to create images in which the experience of finding and collecting specimens is distilled into mesmeric icons to captivate the human eye.
Working through multiple layers of subtle tones and hues, colour choices referring to those found in the original plant, reflect their functional characteristics and communicate their unique character as autonomous objects.

As plants have evolved physical strategies for the dispersal of their pollen and seeds, so the images become the source for diverse projects. Design collections provide the focus and conduit for public interaction while publications in multiple languages, installations and exhibitions become the dispersal channel for revealing a personal vision to new audiences.